Rising above challenges to make a lasting impact. 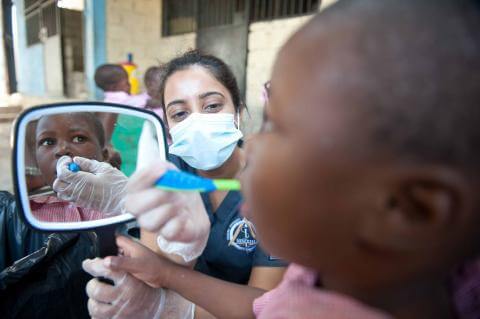 “Advocacy” is woven into the fabric of Howard University’s DNA. Since the institution’s founding in 1867 the faculty, staff and students have embodied the mission of truth and service through the pursuit of social justice in numerous ways, including marching, protesting, and lobbying. Now, more than 150 years later, it is evident through the social unrest of today’s society that the need for advocacy must press on. Howard University will continue to lead by example and demonstrate the variety of ways our community can engage: Advocacy through your Voice, Advocacy through your Dollars, and Advocacy through your Vote. While this year’s Homecoming will be virtual due to coronavirus pandemic, now is an optimal time for us to unify our spirits around our collective goals of social justice, inclusivity and equity for all.

Invest in the Advocates of the Future

Being an advocate means standing up for other people, even if you are standing alone. In order to be an advocate you have to be rooted in a purpose that is meaningful and unwavering. You have to be willing to fight for what you believe is right."

A Heritage of Empowerment

Howard University has cultivated generations of advocates across academic disciplines.

Rep. Elijah E. Cummings was a lawyer, orator and advocate who worked throughout his lifetime to preserve American democracy. Born to former sharecroppers in Baltimore, Maryland in 1951, Cummings was no stranger to adversity. With the encouragement of his mother, who had only a fourth-grade education herself, Cummings went on to become the first African American in Maryland history to be named Speaker Pro Tempore, a senior member of the majority party chosen for skill in presiding.

Elijah Cummings graduated from Howard University in 1973 with a bachelor’s degree in political science. He then went to law school at the University of Maryland. He maintained a close relationship with Howard University throughout his lifetime. Cummings practiced law and served in the Maryland House of Delegates for 14 years. In 1996, he was elected to the Federal House of Representatives, where he advocated for the working class in his Black-majority district. He became a powerful voice against voter suppression, launching investigations in Georgia, Texas, and Kansas, as well as monitoring organizations accused of targeting voters of color. The issue of voter suppression was personal to Cummings, who, during a speech in February 2019, recalled his mother’s dying words: “Do not let them take our votes away from us.” In that same speech, Cummings vowed to fight until death to defend the right to vote—and fight he did, until his passing in October of 2019. Rep. Elijah E. Cummings’s legacy as an advocate who fought tirelessly for the rights of all Americans lives on, both at Howard and in the countless lives he touched.

I will fight until death to make sure every citizen…has that right to vote.

Vice President of the United States, Class of 1986, Bachelor of Arts

Sen. Kamala D. Harris was born in Oakland, Calif. She refers to her time at Howard as her “formative years” where she first was introduced to her love of politics. After earning an undergraduate degree from Howard University and a law degree from the University of California, Hastings, she began her career in the Alameda County District Attorney's Office.

In 2003, Sen. Harris became the District Attorney of the City and County of San Francisco. Having completed two terms as the District Attorney of San Francisco, Kamala was elected as the first African-American and first woman to serve as California's Attorney General. In this role, she worked tirelessly to hold corporations accountable and protect the state’s most vulnerable people.

In 2017, Harris was sworn in as a United States Senator for California, the second African-American woman and first South Asian-American senator in history. Harris serves on the Homeland Security and Governmental Affairs Committee, the Select Committee on Intelligence, the Committee on the Judiciary, and the Committee on the Budget. On January 21, 2019, she formally announced her run for president and hosted her first press conference at her alma mater, Howard University.

Harris’s historic selection as the Democratic vice presidential candidate was announced in August of 2020. Harris is the first Black woman and the first Asian-American to run for vice president on a major party ticket in the United States. Harris’s candidacy represents a milestone opportunity for our democracy to acknowledge the leadership Black women have always exhibited, but has too often been ignored. She was inaugurated as Vice President of the United States on January 20th, 2021.

The thing that Howard taught me is that you can do any collection of things, and not one thing to the exclusion of the other. You could be homecoming queen and valedictorian. There are no false choices at Howard.

Taraji P. Henson is an Academy Award-nominated actress, producer, and mental health advocate. She was born in Washington, D.C., and raised in an apartment that she described as “one step up from the projects”. Henson’s path to an acting career was not always clear-cut. After graduating high school, she pursued a degree in electrical engineering at North Carolina University, but dropped out after failing a math class. Henson transferred to Howard University, where she studied theater while working two jobs to support herself and her newborn son.

After graduating from Howard in 1995, Henson moved to Los Angeles, where she took on an office job and landed small roles in various television series. Her breakthrough role came in 2001, when she starred in the film, “Baby Boy.” From there, her repertoire of film roles grew, and in 2008, she was nominated for an Academy Award for her role as the titular character’s mother in “The Curious Case of Benjamin Button.” She focused primarily on film until 2015, when she returned to television in “Empire” as Cookie Lyon, a role for which she received an Emmy nomination and a Golden Globe award. Her 2016 role as Katherine Johnson in the critically acclaimed film “Hidden Figures” cemented Henson’s popularity and iconic status.  In 2018, Henson founded The Boris Lawrence Henson Foundation, a nonprofit committed to challenging the perception of mental illness in the African American community.

Kwame Ture (formerly Stokely Carmichael) was a civil rights activist, writer, and orator known as a lead figure within the Pan-African and Black nationalist movements, and for coining the slogan, “Black power.” Ture was born in Trinidad in 1941 and immigrated to New York City in 1952. In high school, watching a televised sit-in for civil rights inspired him to join the Congress of Racial Equality (CORE) and participate in sit-ins across the United States. During his freshman year at Howard University, where he majored in philosophy, he participated in his first Freedom Ride. The Freedom Rides were integrated bus trips through the American South in protest of the segregated public transportation system.

After graduating from Howard in 1964, Ture became a field organizer with the Student Nonviolent Coordinating Committee (SNCC). He played a vital role in the Freedom Summer, a campaign to register black voters in the Deep South. However, he eventually became disillusioned with the slow pace of progress and continued police violence faced by activists for integration. In 1966, Ture gave the speech wherein he first spoke the words “Black Power,” calling for cultural, political, and economic self-determination for Black people around the world. He joined the Black Panther Party and journeyed around the world to visit with revolutionary leaders, eventually ending up in Conakry, Guinea, where he changed his name from Stokely Carmichael to Kwame Ture in 1969. There, he dedicated the rest of his life to Pan-African unity. In his writings and speeches, Ture helped to redefine African American identity--as well as Black identity around the globe--with his revolutionary proclamation that Black is beautiful.

The job of the conscious is to make the unconscious conscious.

Jessye Norman was a Grammy Award-winning operatic singer, humanitarian, and Howard alumna known for her powerful voice and stage presence. She was born in 1945 in Augusta, Georgia to a musical family that nurtured her budding talent. Growing up in the Jim Crow South, Norman helped to integrate local businesses, participating in sit-ins at segregated lunch counters. At the age of 16, Norman’s performance at a vocal competition earned her a full scholarship to Howard University. She graduated from Howard in 1967 with a degree in music, then went on to complete her graduate education at the Peabody Conservatory and later at the Michigan School of Music, Theatre & Dance. Over the course of her lifetime, she earned several honorary degrees from a number of other prestigious institutions.

Norman’s opera career took off in Europe. She made her debut in 1969 in Germany, then continued to perform at famous opera houses around the world. Her worldwide success as a Black woman on the operatic stage was both rare and groundbreaking. Though billed as an operatic soprano, Norman had an impressive vocal range and a diverse range of musical interests, including popular music, gospel, blues, and more. As a humanitarian, Norman addressed hunger, homelessness, youth development, and arts education. In 2003, the Jessye Norman School of the Arts opened in her hometown of Augusta to provide free education in the arts to underprivileged children. After a long and successful career, she died of complications related to a spinal injury in 2019. Thanks in part to her trailblazing efforts, Norman left the opera world a more inclusive place than when she entered it.

I do not consider my Blackness a problem. I think it looks rather nice.

Kenneth Bancroft Clark was an African-American psychologist and researcher. He and his wife, Mamie Phipps Clark, studied psychology at Howard University in the 1930’s and were active in the civil rights movement. During his time at Howard University, the course of Clark’s life was forever changed when he took a class taught by psychology professor, Francis Sumner. “What this professor showed me,” Clark told the New Yorker, “was the promise of getting some systematic understanding of the complexities of human behavior and human interaction… the seemingly intractable nature of racism, for example.”

Together, the Clarks went on to design and conduct a series of experiments commonly known as “the doll test” to study the psychological effects of racial segregation on African-American school children. Their research was cited in arguments during Brown v. Board of Education of Topeka, the landmark U.S. Supreme Court case that ruled segregation unconstitutional and sparked a shift historic toward integration. Clark’s research contributed to the development of integrationist policies implemented at both federal and state levels of government and he published extensive work about the plight of African-Americans in impoverished urban communities.

Intergenerational Advocacy: Since 1867, Howard Has Led The Way.

That legacy of advocacy continues on into the present in our current students, faculty, alumni...

An Agent of Change

A Campus Against Violence

Howard’s community-wide approach to interpersonal violence raises awareness. In the era of #MeToo, where conversations about consent and gender-based harassment have gained national attention, Howard University is taking a stand with a campaign a

Howard University Assistant Professor Bahiyyah Muhammad is not afraid of prisoners or ex-cons.

In a burst of activity not seen since the 1960s, Howard University student activists are making a mark on history. From Peoria, Illinois to Denver, Colorado to Honolulu, Hawaii, students are rallying, marching, and organizing as part of the George Floyd and Black Lives Matter social movements.

Howard President Wayne A. I. Frederick to Deliver Homecoming 2020 State of the University Address on October 16

You can say my activism started at Howard...I strongly believe it’s our responsibility as Howard men to bridge the gap between Howard University and our community."

Bison carry the future on their shoulders. Many also carry the burden of financial hardship brought on or intensified by the COVID-19 pandemic.

It's time to advocate for the advocates.

Help us provide scholarships for 100 students next semester.

Give to the HU Homecoming 100 Fundraiser